I don't know if the problem is with my husband only or if the trait is common among all men that they don't do things unless reminded 100 times over. One very interesting quirk of my husband is if I tell him to do a certain thing in kitchen, he comes and engages himself in doing all sorts of other nonsense other than the work I assign him to. Any work requiring gentle handling if I assign mindlessly to my hubby, sure he is going to ruin it. Once while going to a party I was trying to wrap a bracelet, that I beaded myself painstakingly through many days, around my wrist but somehow could not manage to bind the clasp when I had to call my hubby for help.  He came, jerked the clasp with such a force that the bracelet intricately woven in beads fell pell-mell into tiny bits on the ground, to my utter dismay. Our refrigerator is another item subjected to his force of strength every now and then. Recently while opening the fridge he pulled the door with such might that the buckle around the front shelf on the door came loose and all the things stuffed in the shelf tumbled out on to the floor, splinters of a jar of cherry preserves flying through the air. It was not the first time he made such a mess by the way, whenever I see him around the fridge knowing his nature I tell him to practice caution while opening the door but he is he; my words go in with one ear and out with the other. 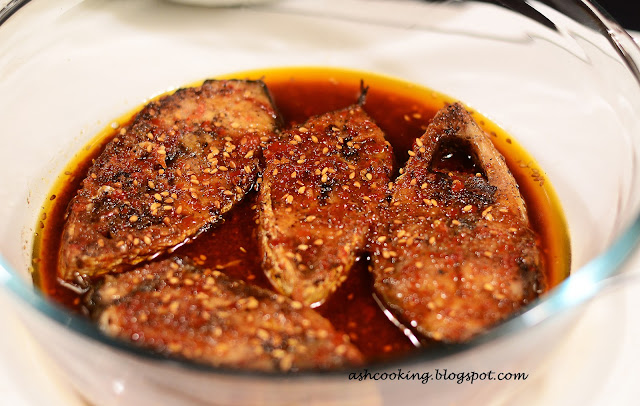 Then the other day I sent him to the market to buy boneless chicken and chicken broth. He returned home with two packages of chicken broth but there was no sight of boneless chicken. When enquired, he scratching his head told me that he forgot about the chicken and accused me rather that I should have reminded him when he was going out. Now I don't know how many times I need to echo the reminders. Again he rushed to the market to buy boneless chicken. I think I can write an entire diary narrating episodes of such breakage and losing of items caused by my hubby's carefree calamitous nature. Recollection of those incidents later brings a smile on my face but at the time of occurrence, all I feel is sheer irritation.
Hilsa in Vinegar Sauce is an interesting concoction the recipe of which I picked up essentially from a cookery show. It is interesting because it has no hassle of chopping veggies involved. It can be made in one of those busy days when you want to cook fish curry speedily with little preparation . 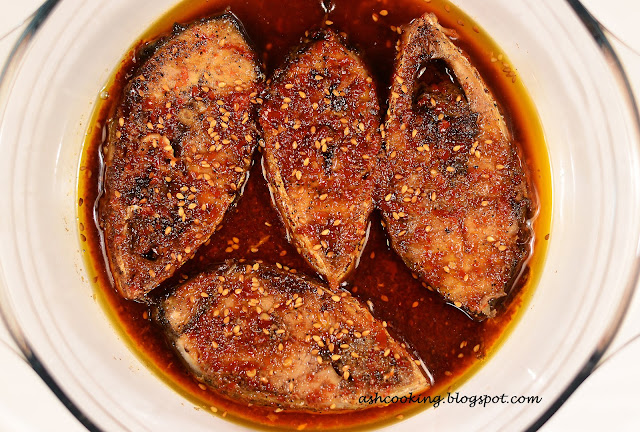