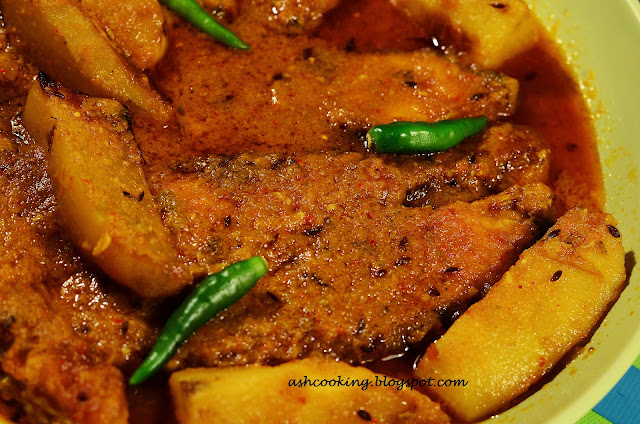 I was in for a surprise when yesterday while shuffling through my recipes, I discovered the recipe of Rohu Fish Kalia missing from the list. It's unbelievable. In my attempt to try a whole spectrum of unique fish preparations, I gave the most common yet the most popular Rohu curry of Bengal a miss. Trust me, it was not deliberate. Rui Macher Kalia is quite staple in our home, but somehow the recipes which are not so easily available on the net or which are not so common a preparation in our part of the world got more preference in my blog or rather simply put, I was more in favour of this idea of posting the experimental recipes frequently in my blog than the common ones which are cooked at every home. Whatever the reason may be, I was shocked not to have found the recipe of Rui Macher Kalia uploaded in my blog. As far as my memory goes, I have taken the pictures of the curry every time I made it at home, but at the last moment I might have become engrossed with something or the other. My mind never remains in one place for long, normal for anyone tugged between career and family. So the skip happened.

Anyway better late than never, Rohu Fish Kalia as I have mentioned is one of the popular rohu fish preparations in Bengal. Before the fashion of caterer service or verbosity of menu came into picture, traditionally in our marriages in West Bengal, all the food arrangements on special occasions like marriage or rice ceremony were done by a group of 'thakurs' who had been into the profession of cooking from generation after generation. Rui Macher Kalia used to be a sacrosanct item in their menu. In my childhood I attended many such marriages or occasions where Rui Macher Kalia or Katla Macher Kalia were served in the fish menu. The oil and ghee glistening on the surface of the gravy easily came to notice evoking temptation. However, these days no longer Rui Macher Kalia is served in marriage ceremonies, other fancy preparations having taken its place. 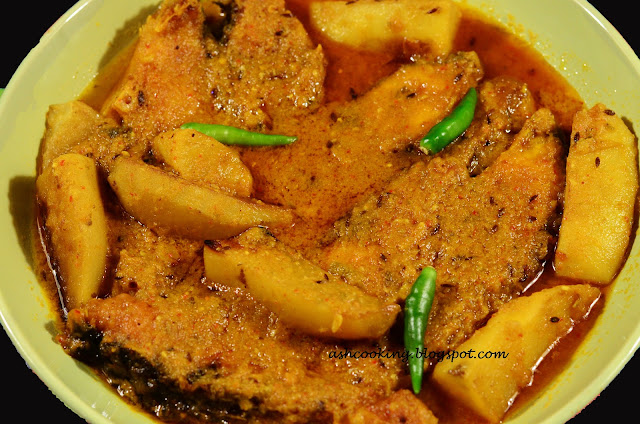