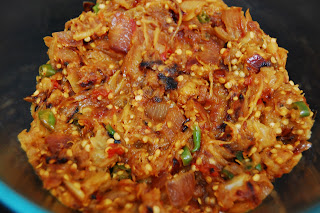 As a child I was not very fond of vegetables except potato and I gave my mother some tough time when she tried feeding me a morsel of any vegetable curry.Of all the vegetables, brinjal was my least favourite and no coaxing and cajoling could work in forcing a brinjal preparation down my throat.I wouldnot just have it at any cost. I was quite a stubborn child and my refusal never turned into an affirmative, but my mother being equally stubborn pursued her endeavours to feed me nutritious vegetable dishes saying that I would not grow into a healthy girl if I continued living on a diet of fishes, eggs, chicken and potato without vegetables and when such brainwashing wouldnot budge me, she sometimes resorted to scolding and thrashing as last-ditch effort.

Now all grown-up I can imagine the hard time I gave my mother over food and pray that my children would not make me suffer over vegetables as I did.Well, after my marriage I have changed a lot as far as finickiness over food is concerned. Sometimes situations force you to get into a compromise with a lot of things you otherwise turn up your nose at. Marriage is one such transitional stage that changes a man and woman from within, putting you through a variety of circumstances. After marriage I started living with my husband on our own without any elderly support above our heads, and in a nuclear family when things are to be done on your own, many such finickiness, fastidiousness and complaints fly out of the window. I started eating vegetables out of compulsion somewhat since on coming back from office I didnt feel the urge to cook a non vegetarian item as non-vegetarian Bengali dishes require a considerable amount of time and labour for preparation. So we turned vegetarian for most of the week days keeping non-veg delicacies exclusive for the weekends. Believe it or not, after marriage only I realized that vegetable dishes are equally tasty and delicious as any non-veg item. My mother in law can prepare some exotic vegetable dishes that would leave an everlasting impression in one's tastebud.

Feeling ashamed to admit but yes, I tasted Baingan Bharta cooked by my mother after marriage only and yes, since then I have grown fond of it. Here goes the recipe:

1) Heat a tawa or a skillet and dry roast the eggplants. 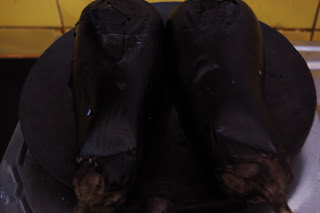 2) When they are roasted on all sides with a sweet burning smell of brinjal permeating the air, take them off the heat and remove the husk.

3) The flesh of the roasted eggplant would be soft from inside and so once the husk is removed, mash the eggplants with your hands just as shown in the pic below: 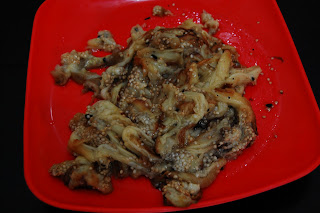 3) Heat the oil in a frying pan. Add the chopped onions and tomatoes and fry them till they turn translucent.

4) Then add the mashed eggplants along with green chillies. Add 1 tsp of turmeric and salt. Fry the eggplants on low or medium heat thoroughly, stirring sporadically.

5) When the eggplants would become brownish in color, taste the salt and take it off the heat. Serve hot. 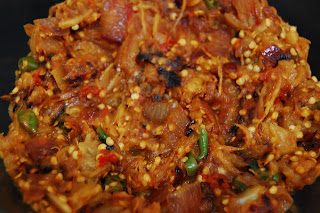