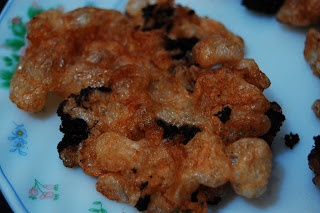 Today was Saturday and I was not well since morning. Fortunately, my husband gets a day off on Saturday and so he made all the arrangements for lunch. In the afternoon unable to bear the stomachache for any longer, I swallowed a painkiller. By the evening I was standing on my toes, ready to roll my brush with cooking. I had been planning to prepare Fish Kabiraji since the time my mother shared the recipe on phone and my husband in an excitement to have his favourite fast food, after a long time of his leaving Kolkata, added Bhetki in his weekend shopping basket. Without wasting any further time, I set about preparing Fish Kabiraji which tastes best when prepared with Bhetki fillet. But as an alternative option, it can be prepared with Gurjali fish also.

1) Marinate the fish with ginger paste, garlic paste, salt, lemon juice, pepper powder and fish fry masala. Keep it aside for one hour.

2) In a bowl, make batter out of cornflour, the yellow portion of the egg i.e yolk and water. Make sure the batter has smooth consistency. Add salt, sugar and pepper powder into the batter and mix well.

3) In another separate bowl, mix the albumin i.e the white portion of the egg with 2 tbs of cornflour and stir till they combine into a smooth potion. Ascertain that cornflour doesnot form lumps.

4) Now heat the oil in a frying pan. Dip the fish fillets into the batter made out of egg yolk, cornflour and water and fry them one by one.

5)While frying the fish fillets, pour a spoonful of white mixture prepared from albumin and cornflour over each fish being fried on the pan. This is an important step. Make sure that the white mixture is poured on the surface of each fish fillet on both sides. As soon as the whites of the egg would come in touch with the hot oil, it will become fluffy enveloping the fishes in a crispier outer layer.

6) Thus following the above steps, fish fillets are to be fried into Fish Kabiraji. Serve hot with chutney or kasundi.
at October 16, 2011