Recent comment of Asaram Bapuji on how calling the rapists 'bhaiya' and chanting the Saraswati mantra would have saved the hapless girl from being brutalized has sparked a lot of controversy across our nation. Many of my friends quite perturbed by the comment poured their heart on Facebook in angry status messages, but by such hullabaloo over his comment they are only helping him earn what the comment was meant for - undue publicity and some 30 days of fame. Asaram has become an infamous celebrity overnight; the self-proclaimed godman now is a household name that would give him ample professional leverages in luring more followers. If anyone thinks of his controversial comment going to affect his number of followers, he is wrong. Even negative publicity is a publicity which only will help him gain a slew of new followers. Who has unknowingly and unconsciously supported Asaram reach his goal of attracting new members in his ashram?? We did. 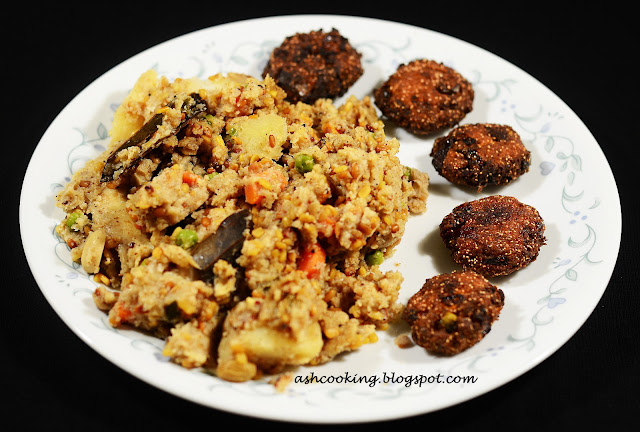 Today on FB, I came across a fantastic parody of the whole situation put into a form of joke as about how following 10 ways as specified by the well-known of our country can prevent a rape. Here it goes:


3. Don't go out with boys in the night. (Courtesy - Abu Azmi of Samajwadi Party). Better still - go on self-imposed house-arrest.


4. Don't wear jeans. Fashion is strictly prohibited. (Courtesy- too many people to mention)


5. Get married when you are 16 years old. (Courtesy - Khap Panchayat)


9. Perform puja to put "stars" in correct "position". (Courtesy - Chhattisgarh Home Minister Nanki Ram Kanwar) And if everything mentioned above fails and you are still being raped, here is the last weapon


10. Call your rapist "Bhaiya". (Courtesy - Spiritual Guru Asaramji Bapu) That ought to STOP THE RAPE!! " (Extract taken from SantaBanta Jokes) 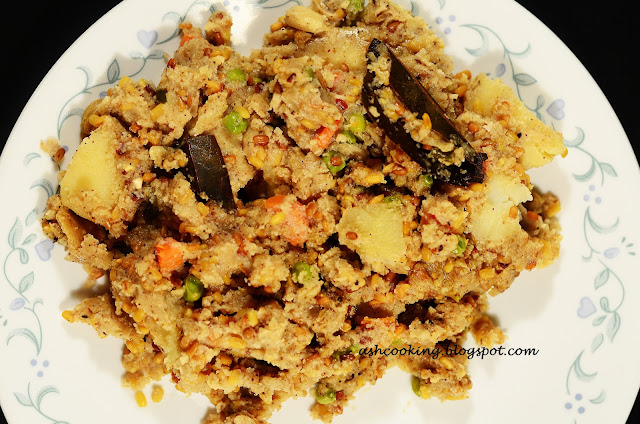 Over to the recipe, Semolina Khichuri is an interesting concoction, the recipe of which required 'radhuni', a special spice very strong in flavor to be added, but although spices sold under the Bangladeshi brand name 'Radhuni' are available aplenty, the 'radhuni' spice that we Bengalis use in many vegetable preparations is nowhere to be found. The availability of a brand by a similar name only leads to more confusion when we look for our Bengal 'radhuni', everyone pointing direction towards the shelf overflowing with the stacks of Radhuni spices. Hence I have told one of my relatives travelling to India to bring a few packets of our radhuni masala on her way back. Meanwhile, since radhuni masala is missing in my kitchen inventory, I make do with garam masala powder which has lent an exquisite fineness to the wholesomeness of Semolina Khichudi. Best served with Narkel boda, this khichuri tastes great with even Narkel Posto Boda.

Email ThisBlogThis!Share to TwitterShare to FacebookShare to Pinterest
Labels: One Pot Meal